4th born is now just over 7 weeks old! Argh pause button, pause button, pause button…….where did that go? Christmas is beckoning and so is something inside me – I want to get going again – at the gym & in the kitchen. Sleep deprivation is one thing & I don’t have much control over that – but control what you can is what I say. And the BIGGEST thing I learned when 3rd born arrived was that a cleaner diet can help you feel WAY WAY better – sleep deprivation and all!

Baby steps – that is the easiest way to do anything in life. It is defined as

“a tentative act or measure which is the first stage in a long or challenging process.”

But you have to start somewhere & let’s face it – if we make changes we want them to be for the long haul & it ain’t gonna’ be easy. But these aforementioned baby steps make these changes do-able and dare I say….rewarding and even fun! 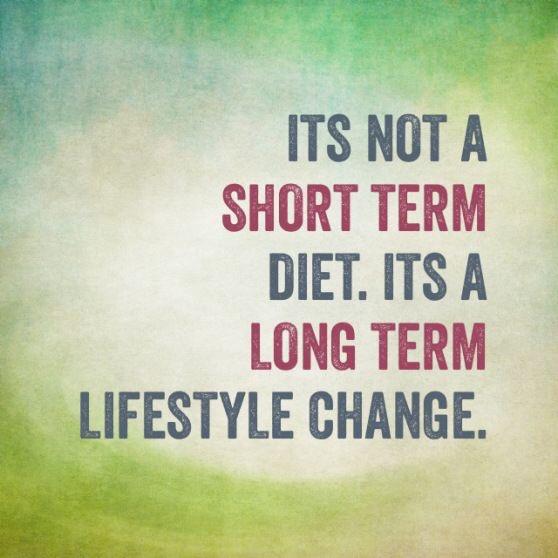 And so where to begin with regards to being healthier? You don’t have to spend hours looking up recipes in order to find some new, healthier alternatives to your staples and treats.

Here is my list of things I have swapped in my diet over the past 18 months. All can be found at the various Farmers Markets near where I live. Despite going to the markets for years, some of these are new to me. This may inspire you to visit a new vendor and discover a great new healthy, high quality product.

I LOVE almond milk. Personally I have NO problems with dairy and eat it readily but I also think it is good to mix things up and not have too much of anything. The supermarket stocked Almond Milk is pretty horrific – with only 2% almonds in the most commonly found variety. And this list of other ingredients would make you wonder. The Almond Milk from the market (or that you can make yourself)  is 20% almonds and 80% filtered water – so it is what it says it is!!

I use it everywhere I would use cows milk really – in my coffee, porridge oats, smoothies, pancake batter – just not my tea!!! If you are wary just try half & half for a while. For example, make your oats with half cows milk and half almond milk. Baby Steps!!!

This is my latest culinary adventure from the local Farmers Market. I don’t drink fizzy drinks as a rule. I gave them up at the start of 2014 and haven’t looked back. Every time I sees someone drinking them all I can picture is them pouring a bag of sugar down their throats. However I do of course love carbonated water – so its not the fizz I have the problem with – just the sugar.

Having suffered 3 stomach upsets during my most recent pregnancy & quite literally feeling half dead I though a probiotic might help so I bought a glass of Kombucha in The Mahon Point Farmers Market in Cork. And I was instantly hooked – they are quite tart – which I love, really refreshing & good for your digestive system.

Kombucha tea is a fermented drink made with tea, sugar, bacteria and yeast. Kombucha tea is made by adding a bacterial colony to sugar and tea, and allowing the mix to ferment. The resulting liquid contains vinegar, B vitamins and a number of other chemical compounds. 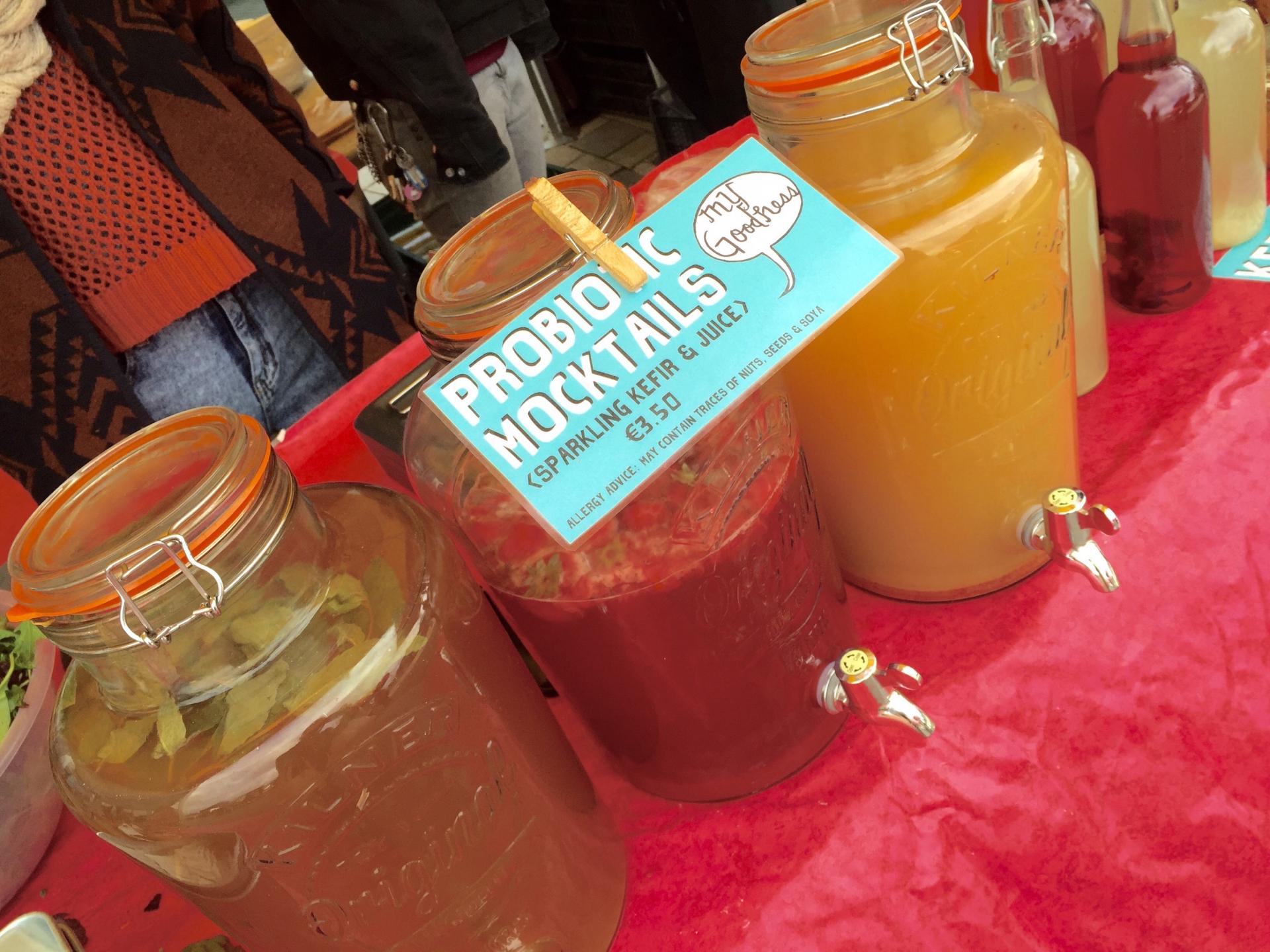 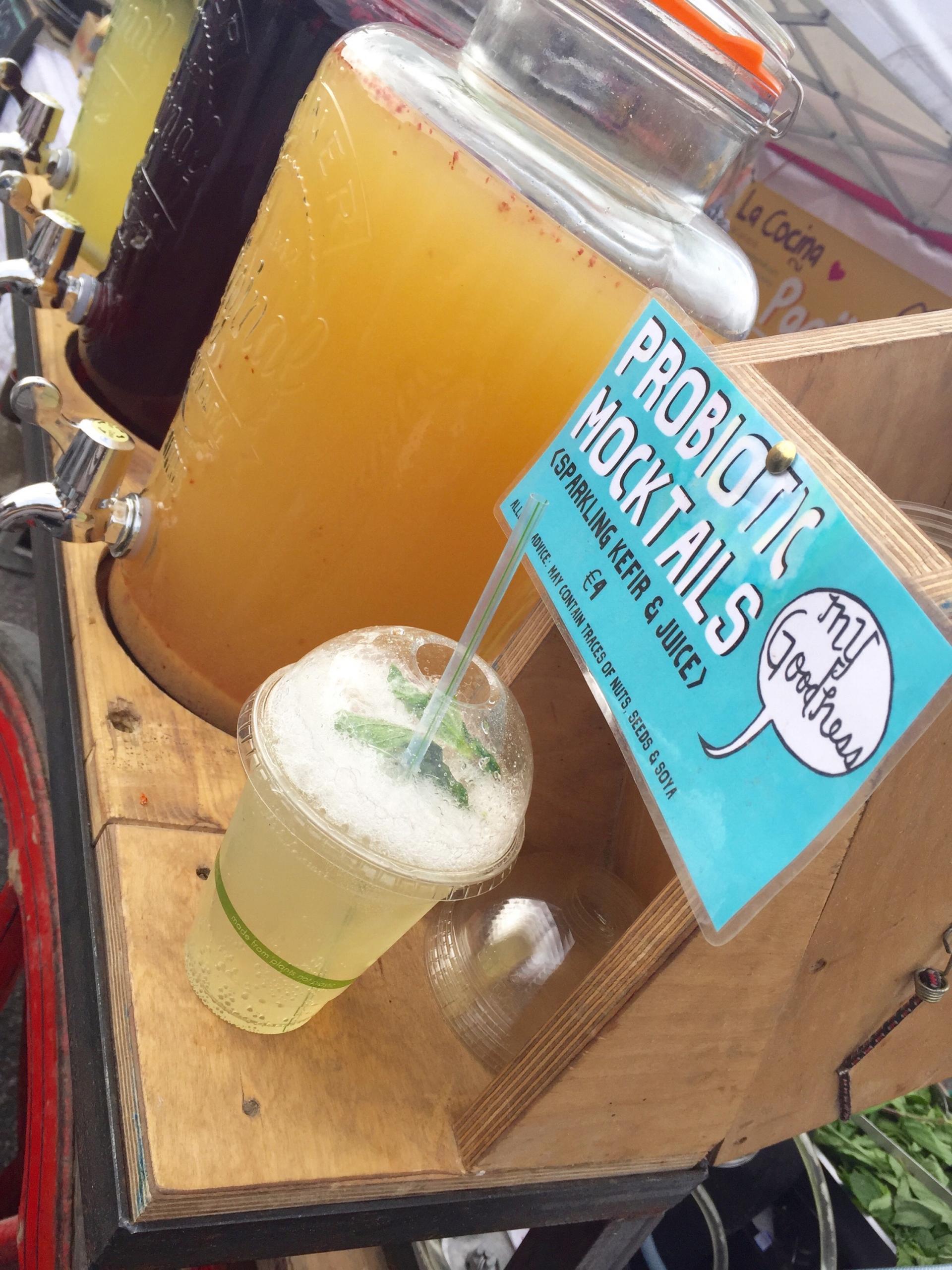 Wheatgrass is a nutrient-rich type of young grass in the wheat family, that is often used for juicing, or added to smoothies or as a shot in its own right.

Wheatgrass provides a concentrated amount of nutrients, including iron; calcium; magnesium; amino acids; chlorophyll; and vitamins A, C and E. Wheatgrass fans say that its rich nutrient content boosts immunity, kills harmful bacteria in your digestive system, and rids your body of waste. There are suggestions that wheatgrass can play a role in the treatment of anemia, diabetes, constipation, infections, skin conditions, ulcerative colitis and joint pain, among other health concerns. However, there are few research studies about wheatgrass, so it’s difficult to assess these claims.

What I love about the stall in Mahon Market is that you get 2 chasers with your wheatgrass. One shot of ginger and then one of apple juice. Try it!!!

I like it – anything packed with anti-oxidants is fine by me – I’m not getting any younger so I’ll readily accept any help that is natural! 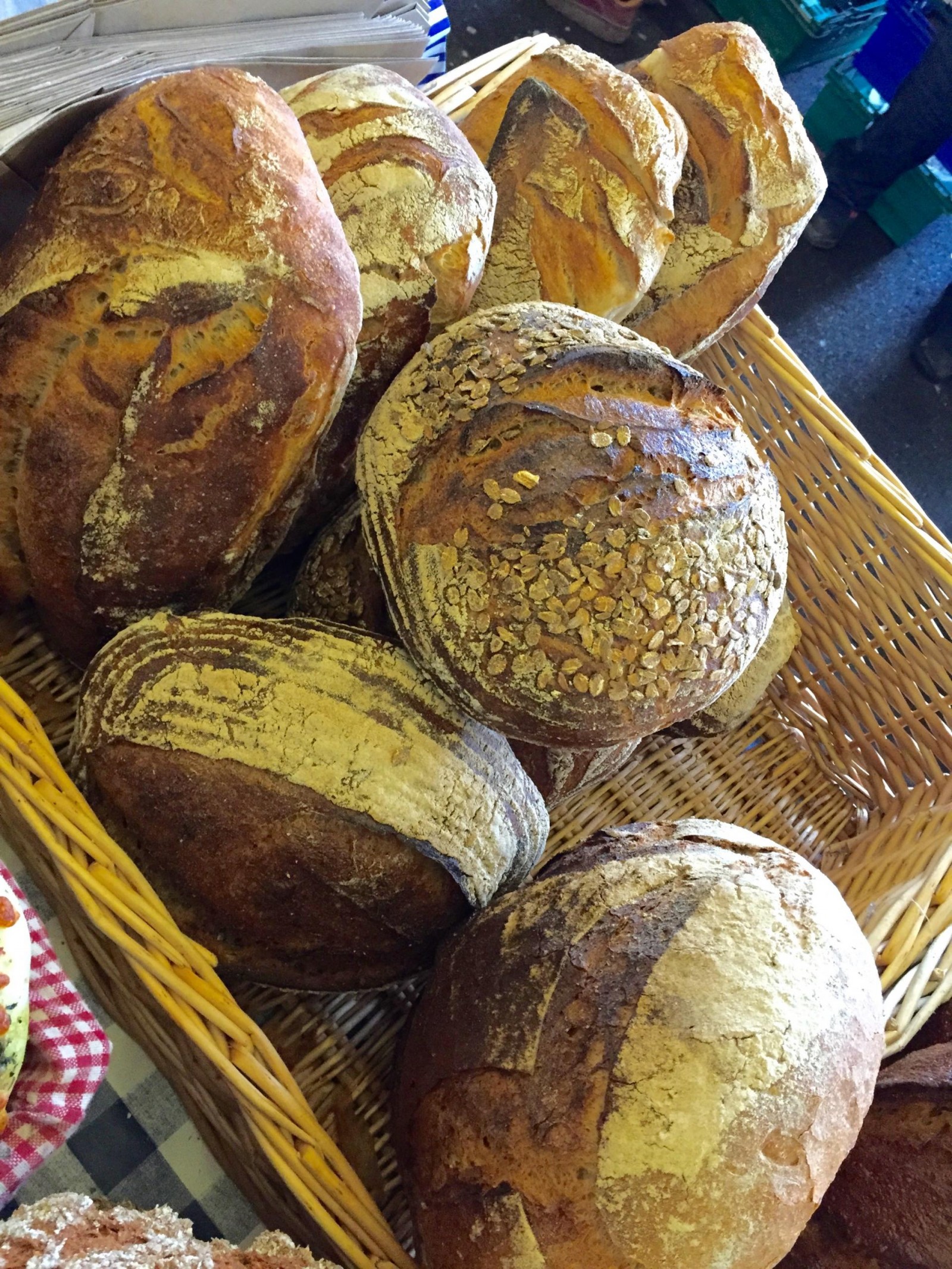 Sourdough often has a lower glycemic index (GI) than that of other breads–meaning, it doesn’t spike blood sugar as dramatically. When eating carbs, it is desirable to have one with a lower GI than a higher one. Generally anything white (pasta, rice, bread etc) has a higher GI than its brown counterpart. Sourdough is also easier to digest than regular bread & less likely to cause food intolerance – basically it’s possible for some people who have trouble with regular bread to have a much easier time digesting sourdough bread.

I get my bread from Arbutus in Cork Mahon or Douglas Farmers Markets. It’s not cheap but artisan never is – lets face it. I do chop the loaf in half and freeze it if I don’t think I’ll get through it. Waste not want not!

A thick slice of this toasted under some poached eggs and chilli or smashed avocado and strawberry with agave is really delicious. 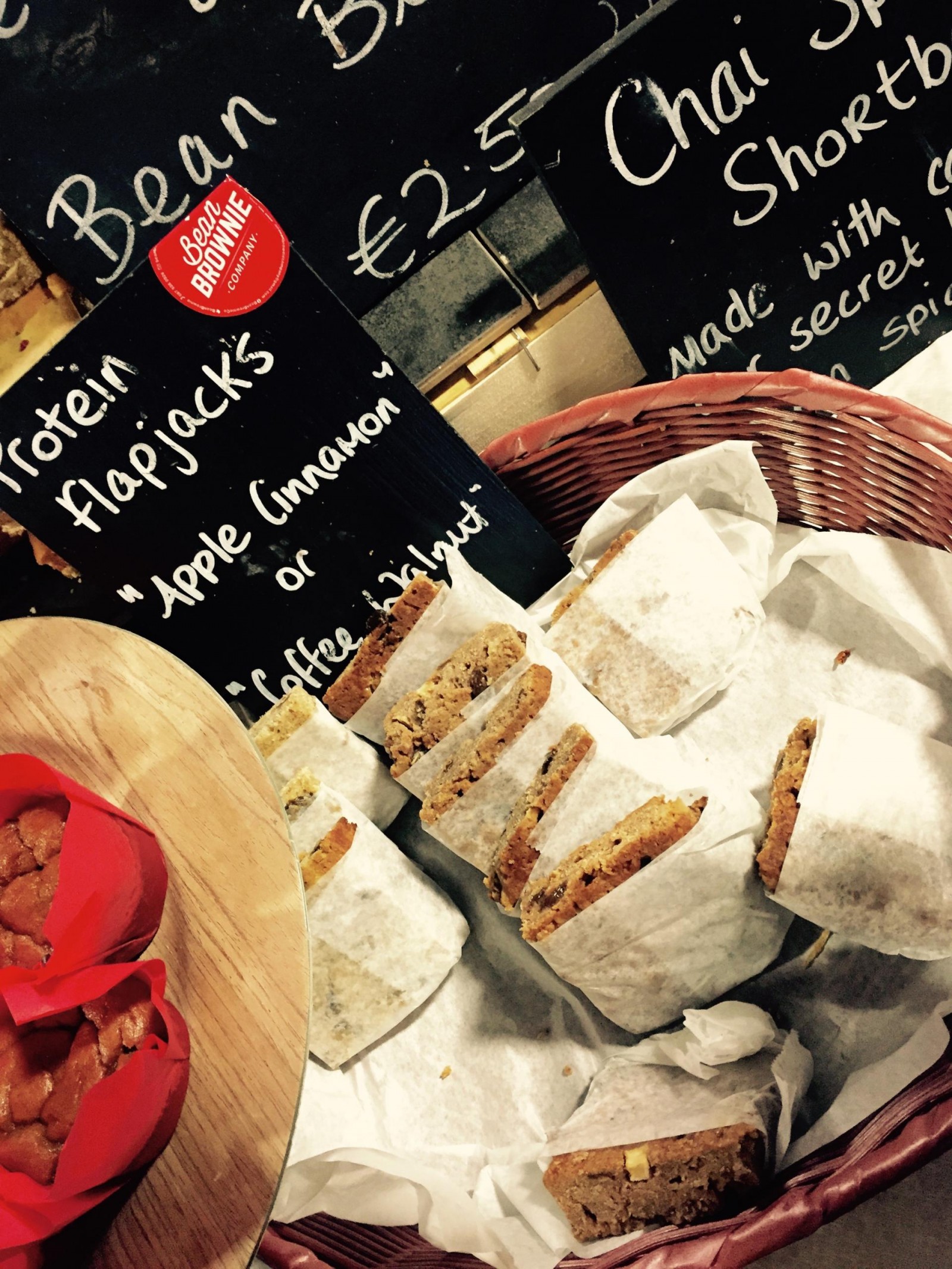 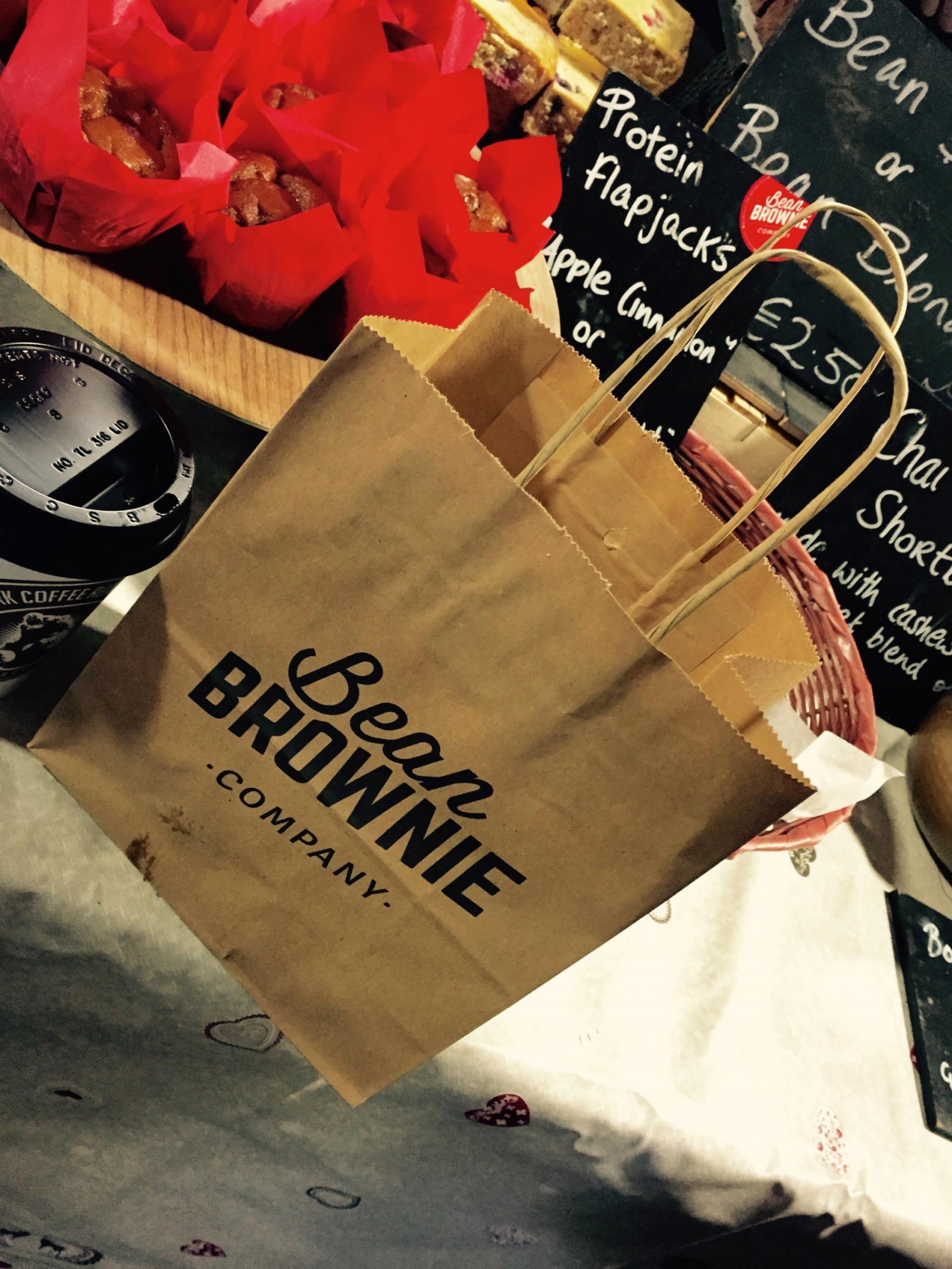 Like 99% of us I am always running late or rushing. Most likely because I try to do too much & then underestimate how long each task will take. And that is one reason why I love the nutribullet. Just whizz it all up and off you go. However if I have one at 8am, by 10am I am usually ready for more food. If I’m at home it’s usually porridge or eggs but when I’m out it can be difficult sometimes to find healthy and tasty options.

Without fail on a Thursday I end up standing staring at all the goodies on the Bean Brownie stand and come away with one of their Apple flapjacks to eat on the spot.

And of course there will always be coffee……… no substitutions allowed here! 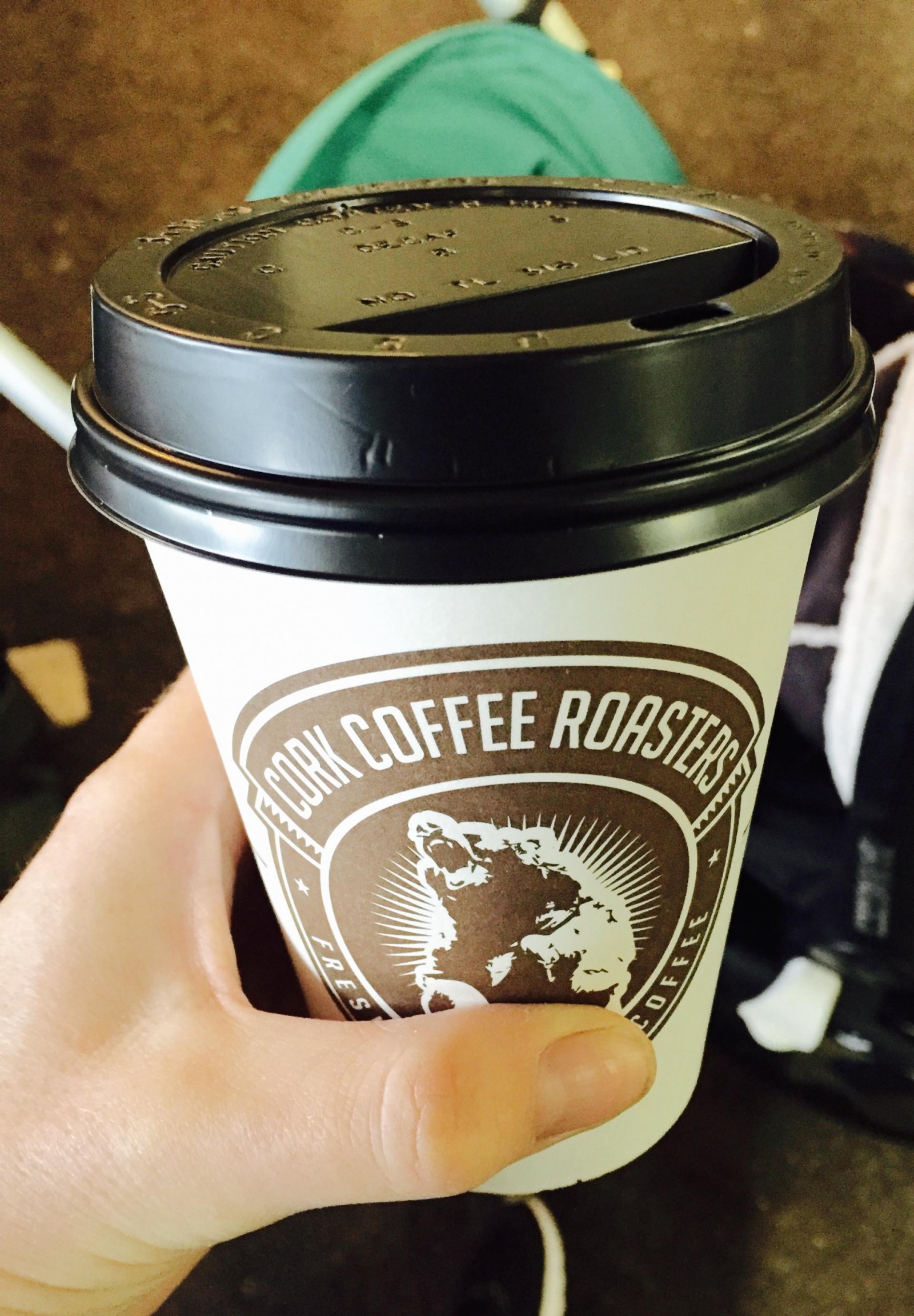 So there you go – if anyone has any suggestions of their own I’d love to hear them so I can try some new stuff too!!!