I nearly got lost yesterday in my own kitchen.

Behind a vat of roast sweet potato, which was wedged between a trough of steamed carrot & a bucket of stewed apple.

Therein lies the problem with batch cooking when weaning times rolls around. You end up with (quite literally) mountains of the same flavoured dinners and precious tiny baby pallet gets so little variety that even you get bored of shovelling the same coloured dinner for a week at a time into his or her precious, toothless mouth.

I’ve tried the lot. Steaming billions of root vegetable types all in one go and reducing different combinations of the same tray of veg’ to smush (technical term for liquid solids) – this resulted in a) running out of teensy elf sized pots and b) my ENTIRE freezer getting filled with babyfood suitable for a 6 month old & forgotten tubs of baby food rattling around in my freezer for the best part of a decade  (ok I exaggerate…..but to a sleepless mum, sometimes a week feels like a lifetime!!) 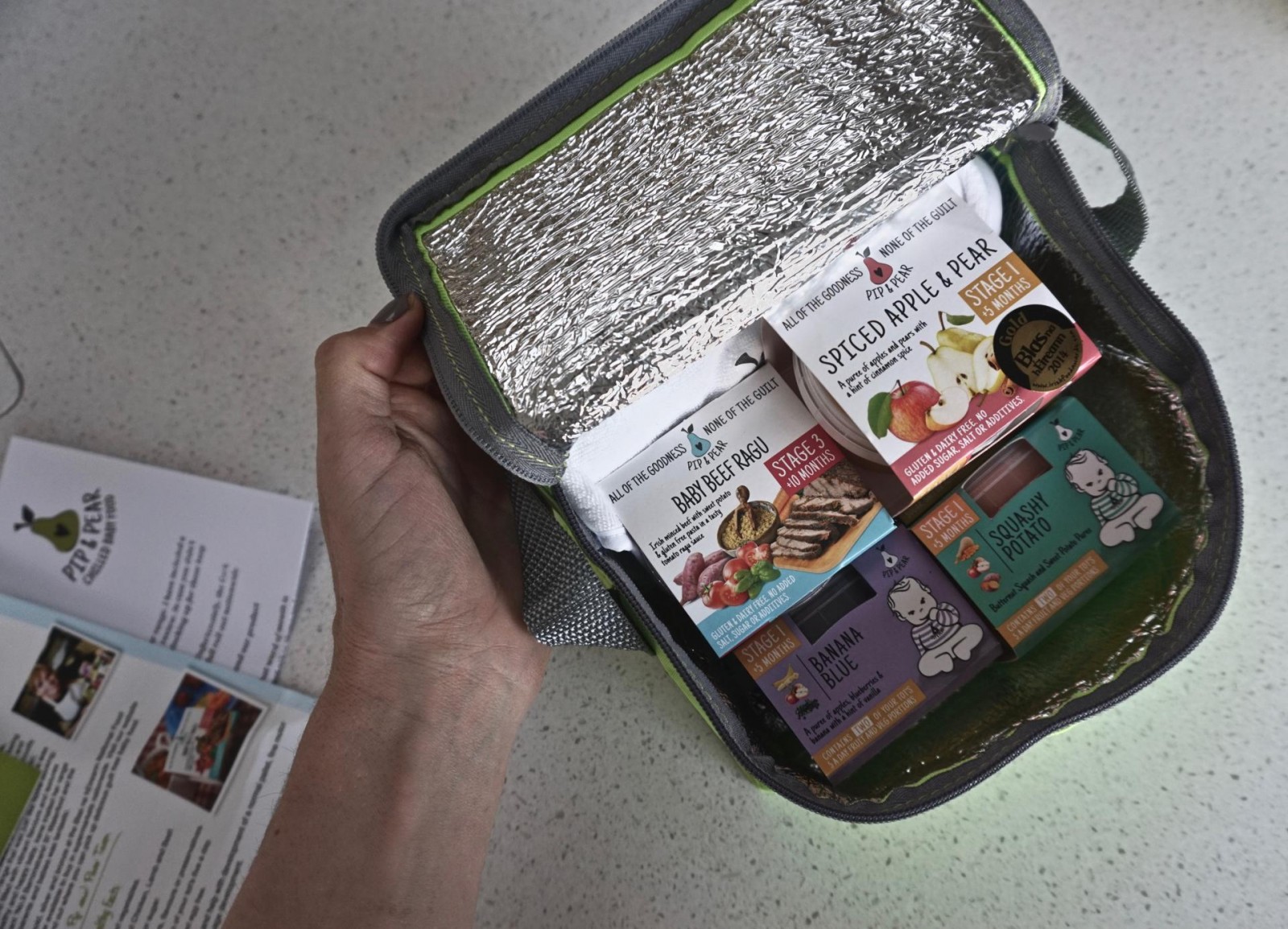 Pip & Pear wan’t around for my 1st 3 kids and I cannot believe that no-body has done this before. It seems so obvious!! What busy mum wouldn’t want wholesome, nutritious & not to mention delicious pre-prepared baby food that is made with 100% organic fruit & vegetables, Irish Chicken, lamb & beef & contains no colours, flavours or preservatives. This is basically home-cooked baby food that you don’t have to home cook yourself! 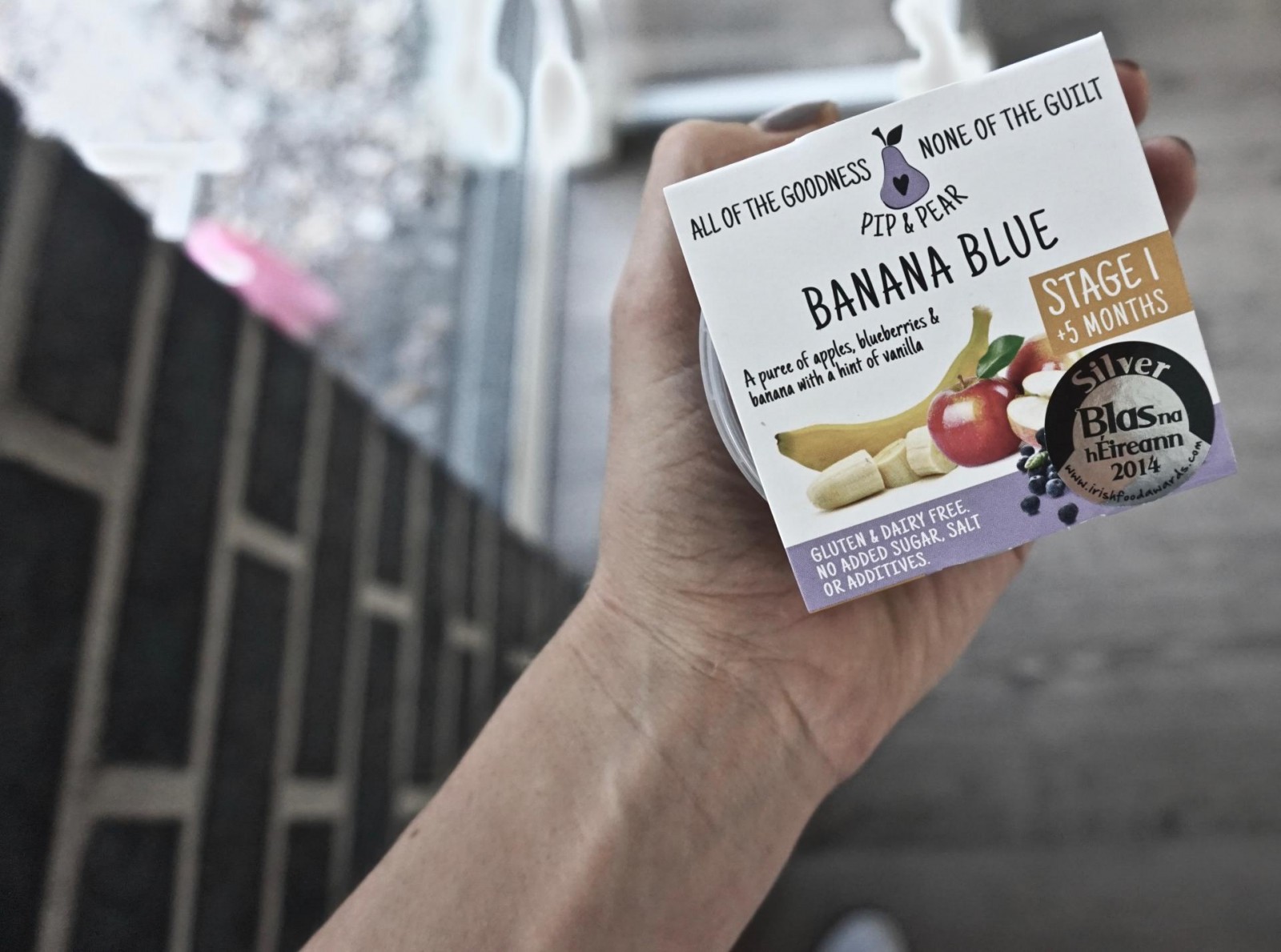 To me this equals more time and less guilt. I can still home cook his dinners but I also can go to Pip & Pear for variety, convenience & sanity!!!!!!

Now I don’t consider myself any sort of a rival to Delia Smith….. buy I’d like to think that I know my way round a kitchen. 4th born has (as babies tend to do) a mind of his own and he just CLAMPS his mouth shut at meal time. He has even developed a method of laughter that entails nostril flaring and nose snorting in order to keep that darn mouth shut. 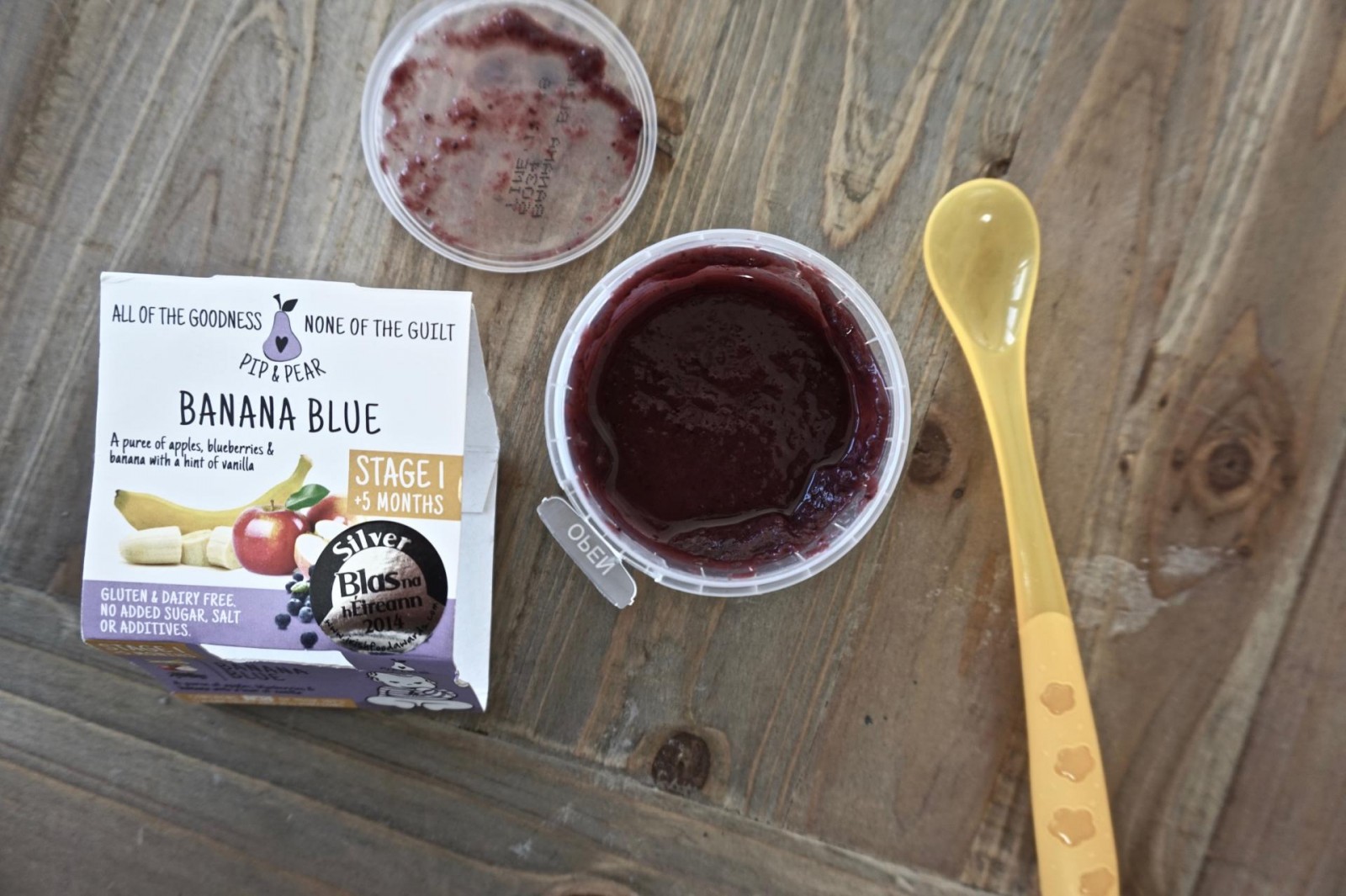 But in the ultimate act of betrayal he opens up and eats the shop bought produce! 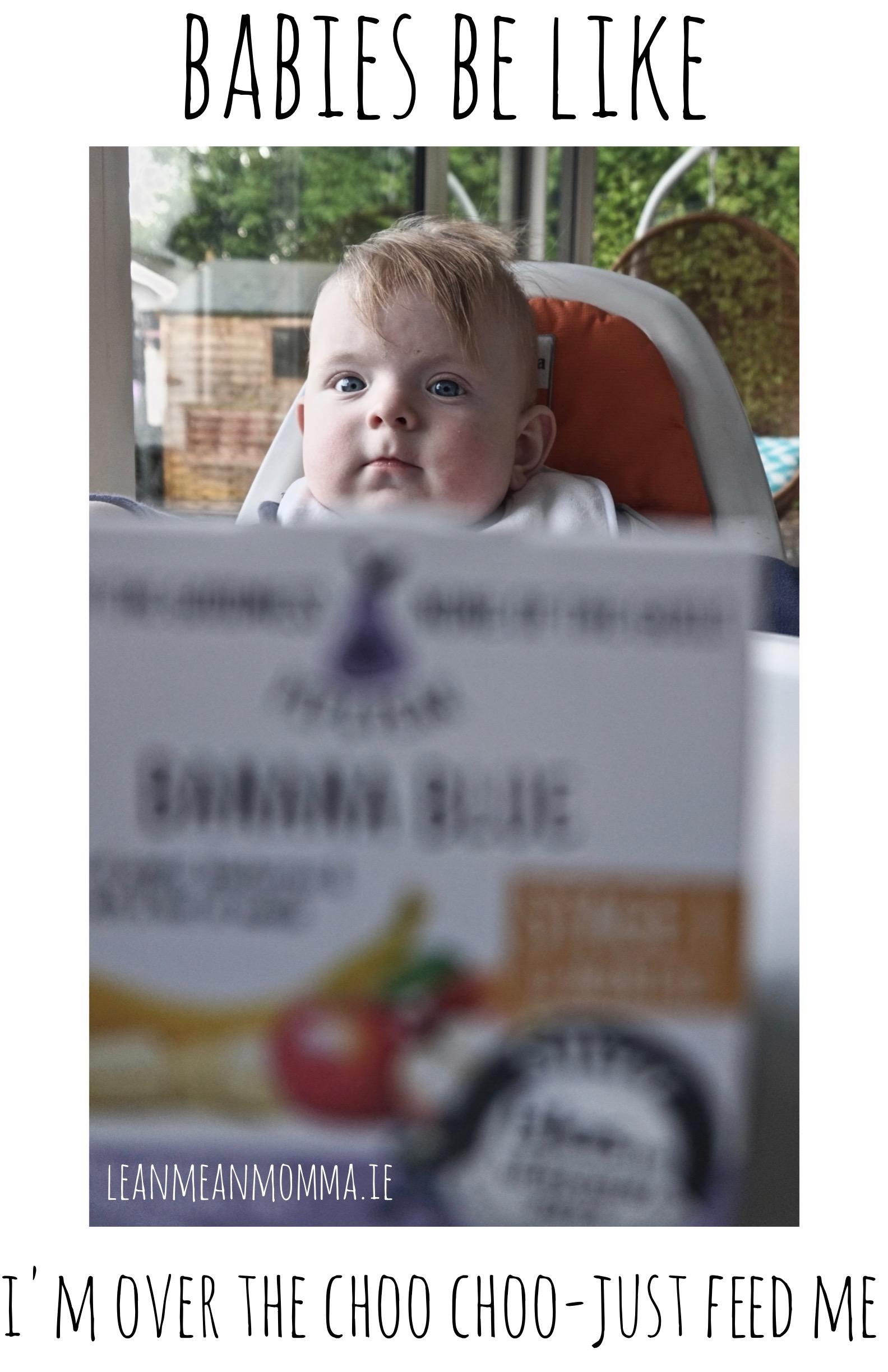 The banana blue flavour was a big hit. It’s an unwritten rule in baby world that the darker the colour of the puree that more they will like it – this normally equates to enthusiasm & thus much spreading/painting/smearing of it in as many places as they can. Banana blue can be found on many parts of our kitchen, such is 4th borns love for it. 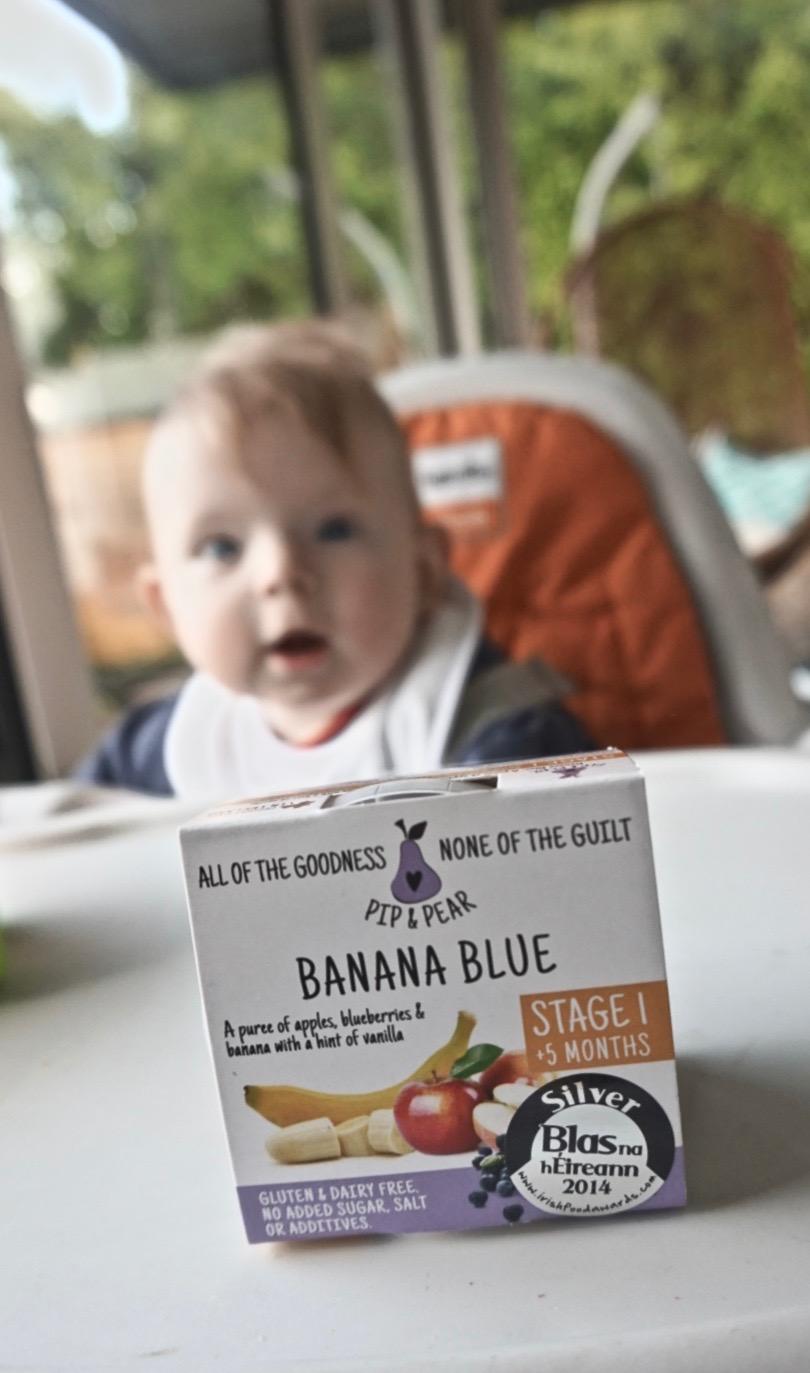 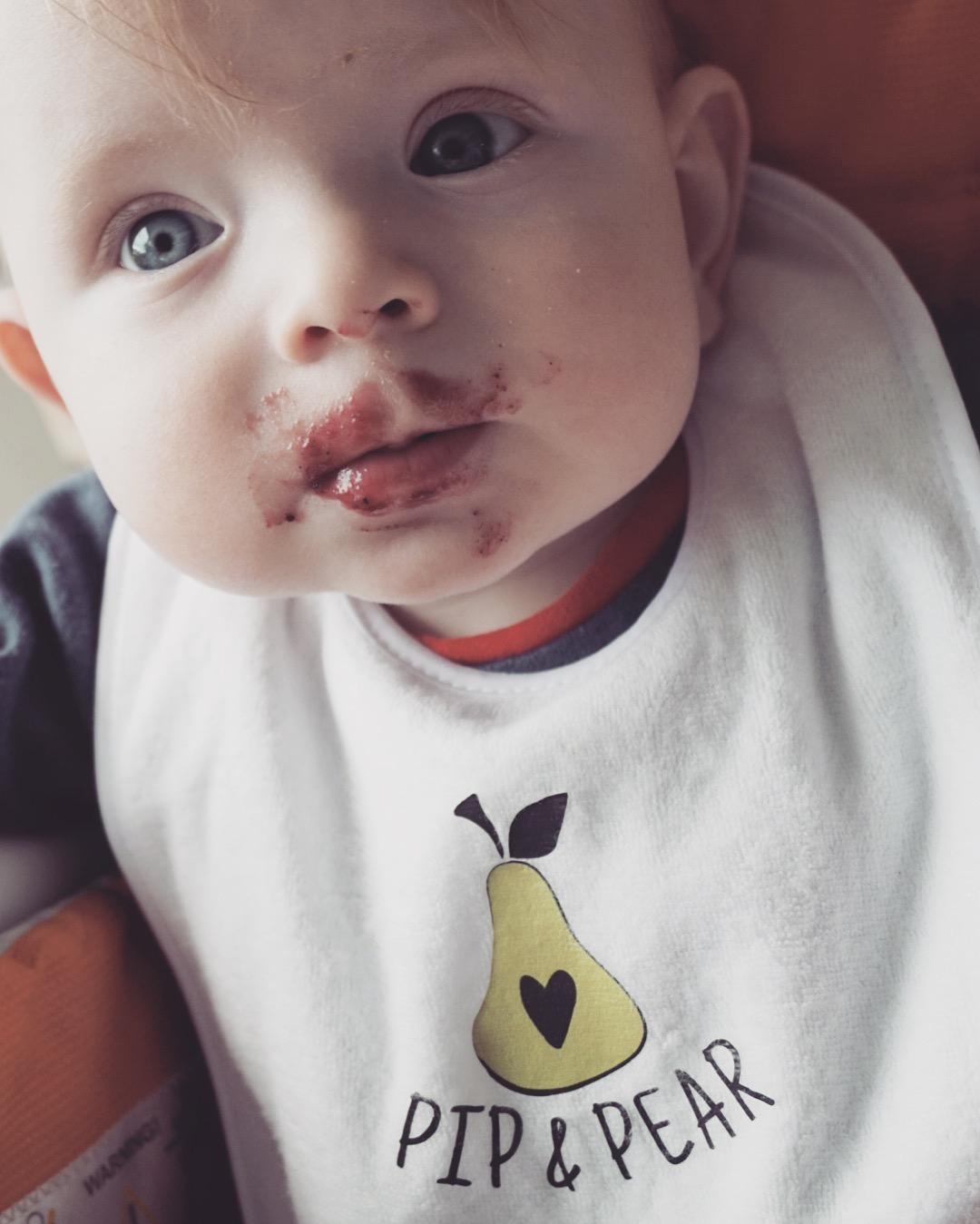 You can check out the entire range from Pip & Pear here.

The great news is that Pip & Pear is now available in 61 Aldi stores throughout Ireland. You can also purchase it in Supervalu – which is what I do in Cork. I truly love these little pots so much that I have been restocking them myself since Pip & Pear were kind enough to send me my own little hamper to try them out.

I gotta listen to the small guy after all!

And what’s more? I now have a GAZILLION little pots for storing my baby food in as all their pots are BPA free and reusable.  Besides baby food housing, I’ve been using these for salad dressings and raisan storage! 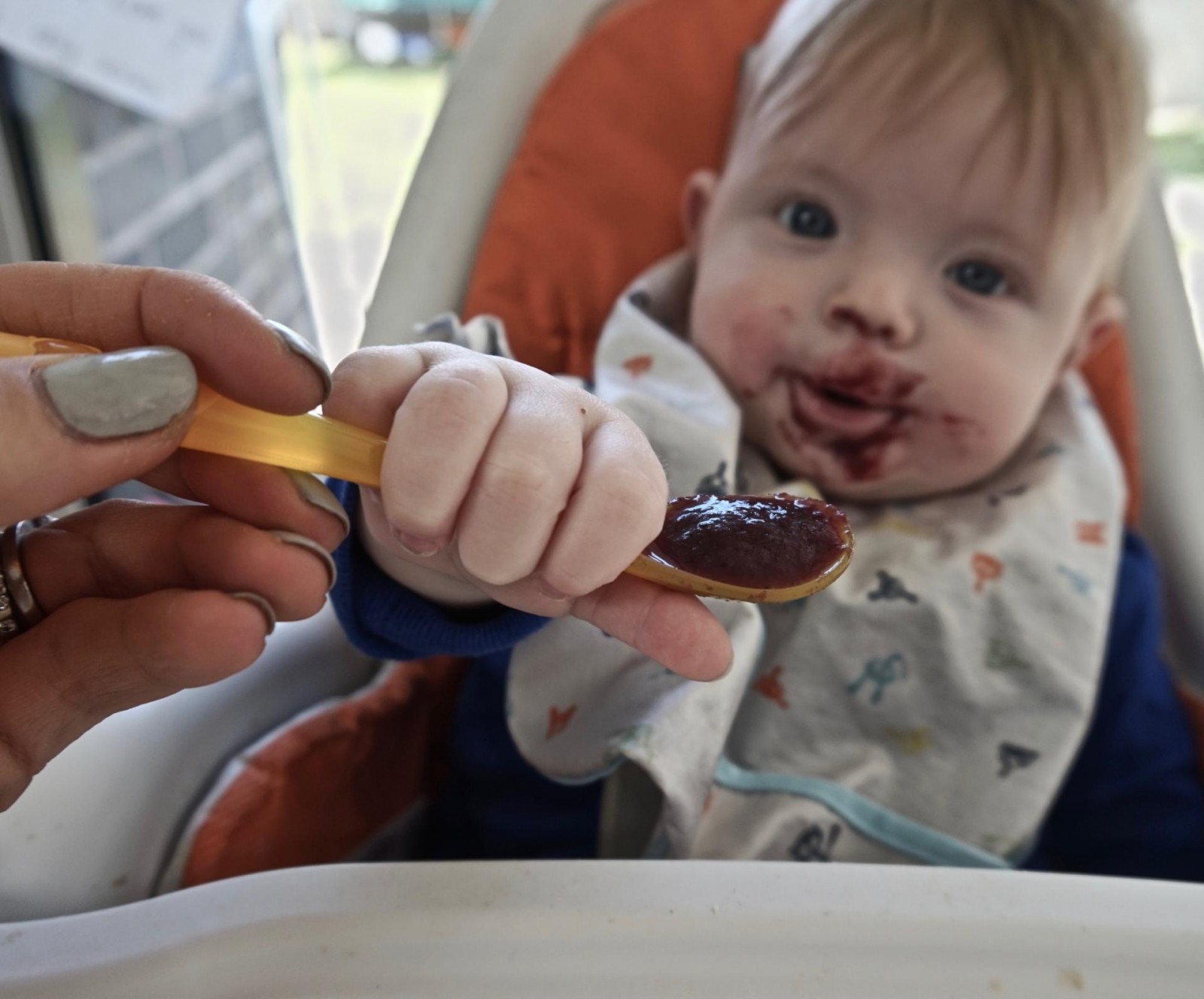 I have a really lovely hamper of Pip & Pear baby food to giveaway on my Facebook page here so head on over if you fancy entering.

Yours, sipping coffee instead of making baby dinners!!!,