“3rd born needs some fibre sooooo why don’t we go to the beach?”

A seemingly ridiculous tongue in cheek suggestion from hubster, in reference to the fact that 3rd born quite literally gorges on sand everytime we hit the beach. So next time you visit a certain beach in Cork please don’t worry that you have missed a horrifyingly destructive storm that has moved your beautiful golden sand elsewhere & this is the start of the Armageddon.

No. 3rd born has simply eaten it all. 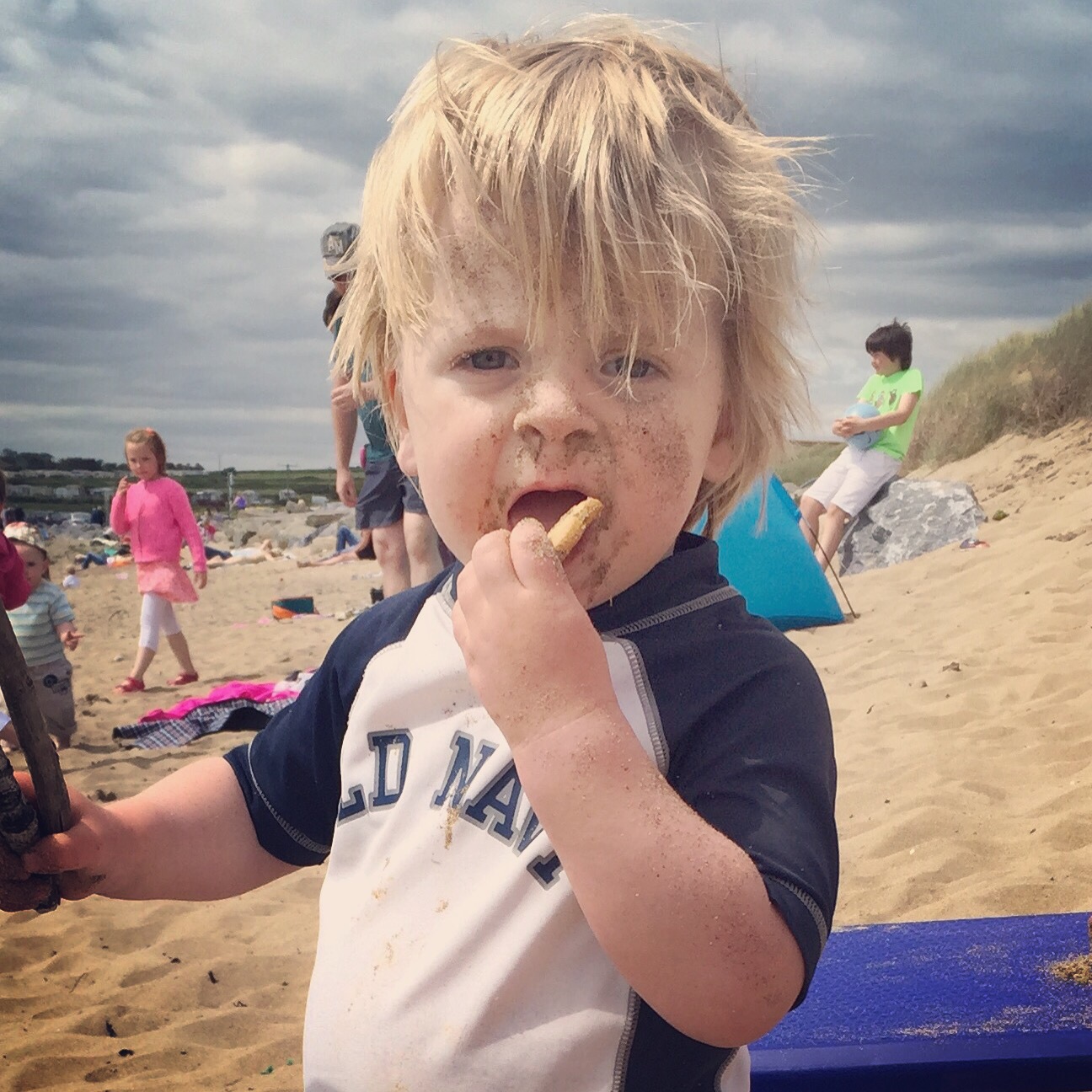 There are digger machines on building sites that end up, quite literally, with less sand in their gigantic jaws than this 1ft high dumpster.

This ridiculous tongue in cheek suggestion from hubster however is entirely serious and hopeful. Hopeful you think? Yes, hopeful.

Hopeful that one day on the beach will allow us to recreate the sort of normality we used to enjoy in our pre-kiddie era. A day spent sprawled behind the security blanket of our windshield basking in the June sunshine, coffee in hand & who knows….maybe even a little snooze.

“Shur we’ll throw in the buckets, spades, 40,000 bags containing spare knickers, nappies, shorts, togs, towels, sun hats, suncream, BBQ, cool box, more spare knickers, parasol, beach tent, chair…..actually no scratch the chair….. We’d only look really naive bringing a beach chair, of all things, to the beach with kids! What else? Yes, in case I forget, wipes, nets, snacks, lighter for the BBQ, picnic rug, ham sandwiches in case the sausages don’t cook through, did I put in the knickers?”

And by 5pm we are ready to go. 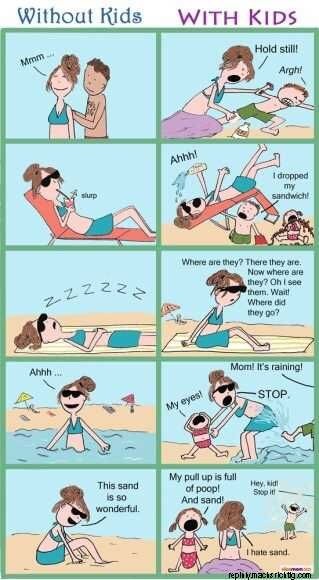 And this is why I now normally pack for the beach the night before we go. Jeepers don’t we know by now that having kids has hammered spontaneity into that wide open grave alongside O’Leary, sleep, warm coffee, unaccompanied trips to the loo & shopping for yourself.

And off we go…..the car brimming with excitement at the prospect of a fun, filled family day that our kids will look back on with a warm fuzzy glow when they themselves are adults. Fingers & toes crossed that the sunshine is more than a ten minute teaser & that, of course, the tide will be out.

If there are no rockpools where we go, well then my friends, you may as well just pack up & go home. 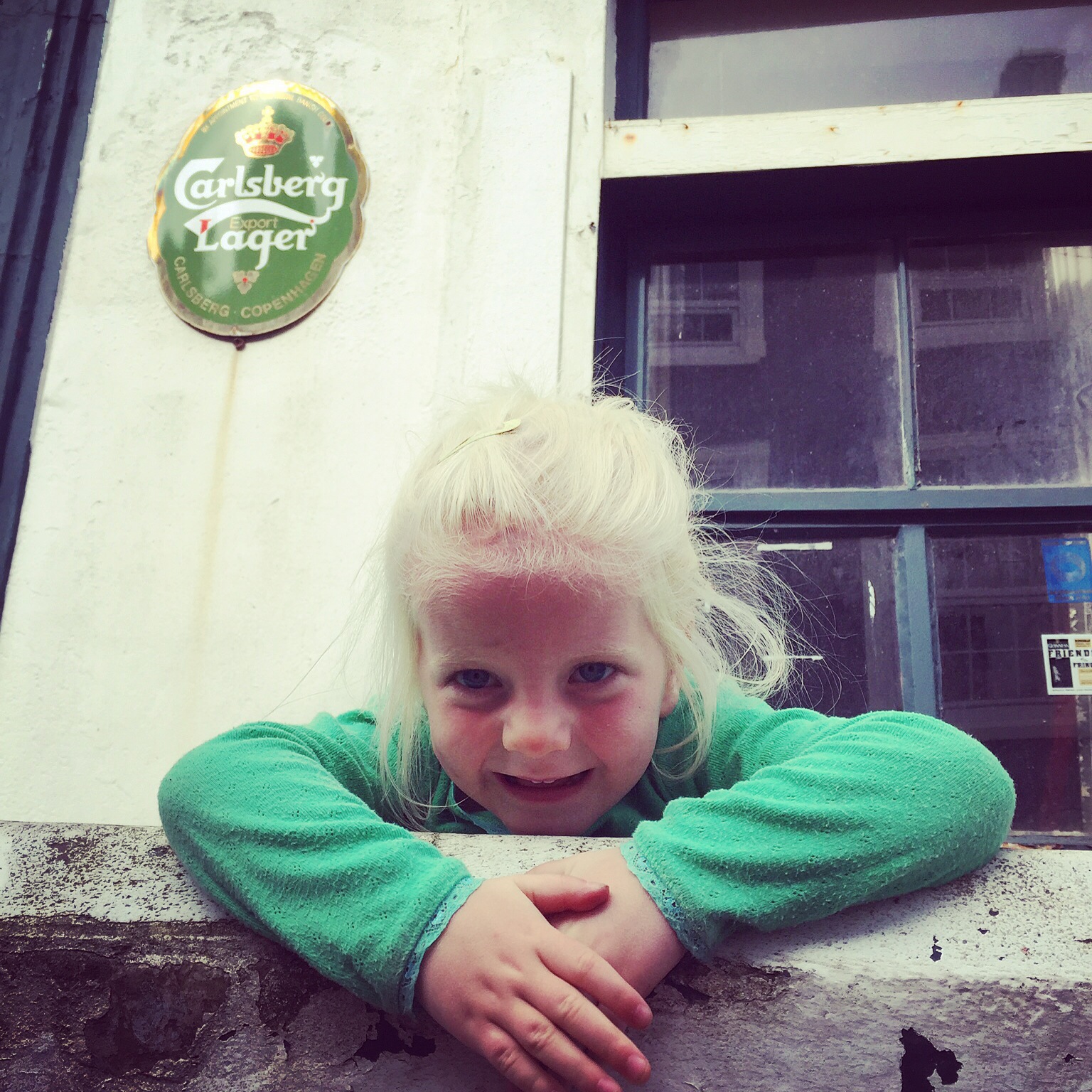 (Last Sunday….if Carlsberg made days out…..)

And so we descend & it normally goes something like this:

Hubster (from here on in to be referred to as H) “Will here do?” *drops approximately 1 tonne of baggage at his feet several feet from the car.

Me: “No let’s keep going down towards the rock pools” *reviews what appears to be a lost & found section of an airport terminal at his feet.

Me: “Tis grand, it’ll be fine” *subscribing to the ‘don’t think about it and it won’t happen’ school of thought. “Here is perfect….now where is the mallet? We’ll have this thing up in one minute”

And this point there is normally a monumental wrestling match with the windshield, about 5 attempts to get the thing to stay upright in several locations around the beach and we are the source of much entertainment to all the other families in the vicinity, who no doubt had done the same 15 mins earlier. And all this culminates in both of us silently vowing to divorce each other once the kids have flown the nest.

And this is pretty much what happened last Sunday on our day out. 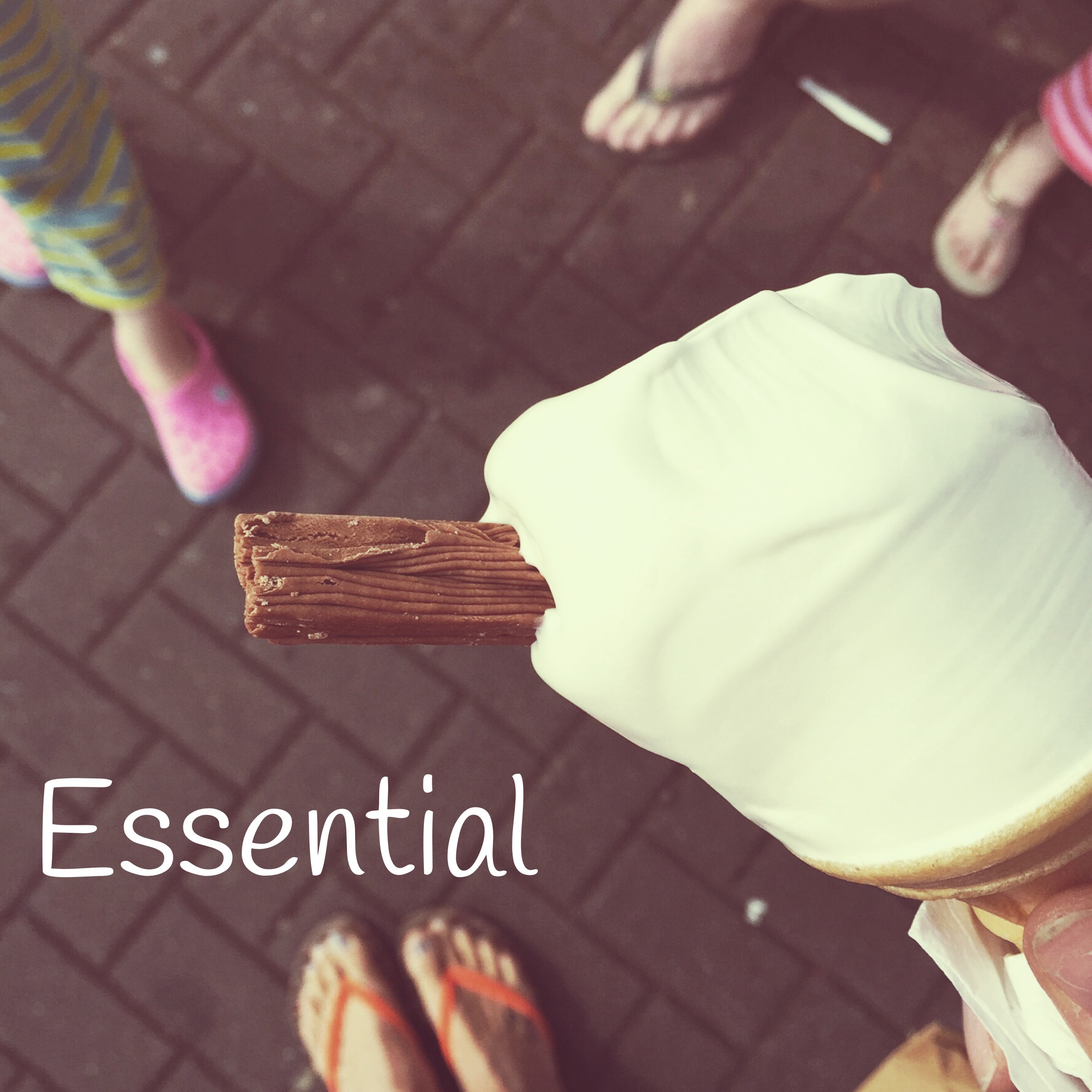 3rd born was attempting to pop the sea snails into his mouth from the rock pools at a rate similar to that which I imagine Tom Hanks’s character would in Castaway – albeit this character was STARVED and 3rd born (who has now decided to exist solely on a diet of fruit) is evidently not. Moobs existent in the most delightful way possible. 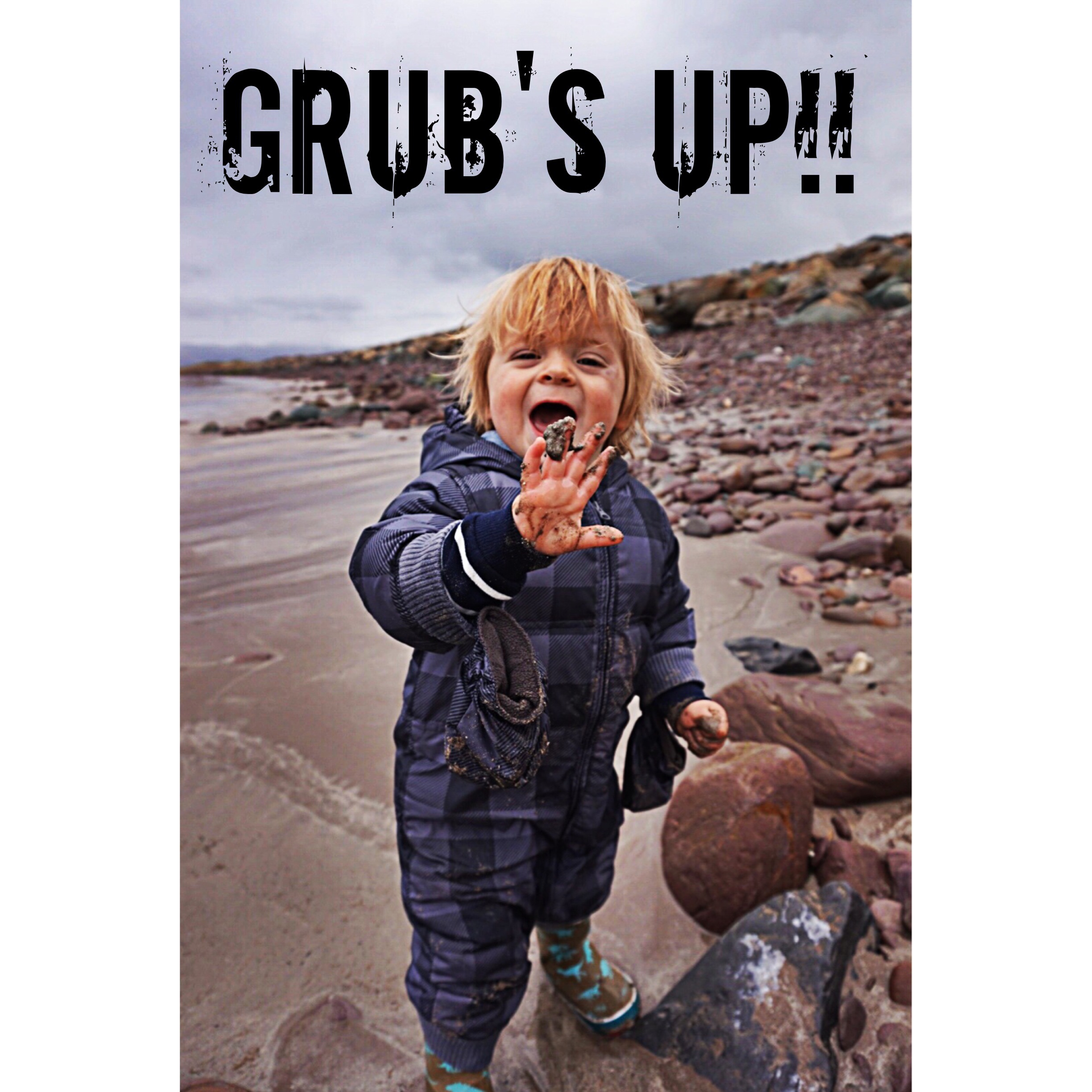 I did feel a huge sense of relief for having attended a talk on seaweed last week & discovered that there are no poisonous varieties. However 3rd born was delightfully non-descriminatory in his approach to rockpool nibbling & so no creature, living or dead, was granted an exemption. The Forager himself.

2nd born announced she needed to wee to the whole of West Cork. Just for fear someone swimming in her proximity allowed themselves to think that there was a lovely patch of warm mid-Atlantic drift (or is it Gulf Stream?) having channelled it’s way through their swimming path. I suppose the fact that she whipped down her bikini bottoms and mooned the whole beach prior to weeing half horizontally & half vertically, down her legs & with no cause for concern meant the game was up either way. 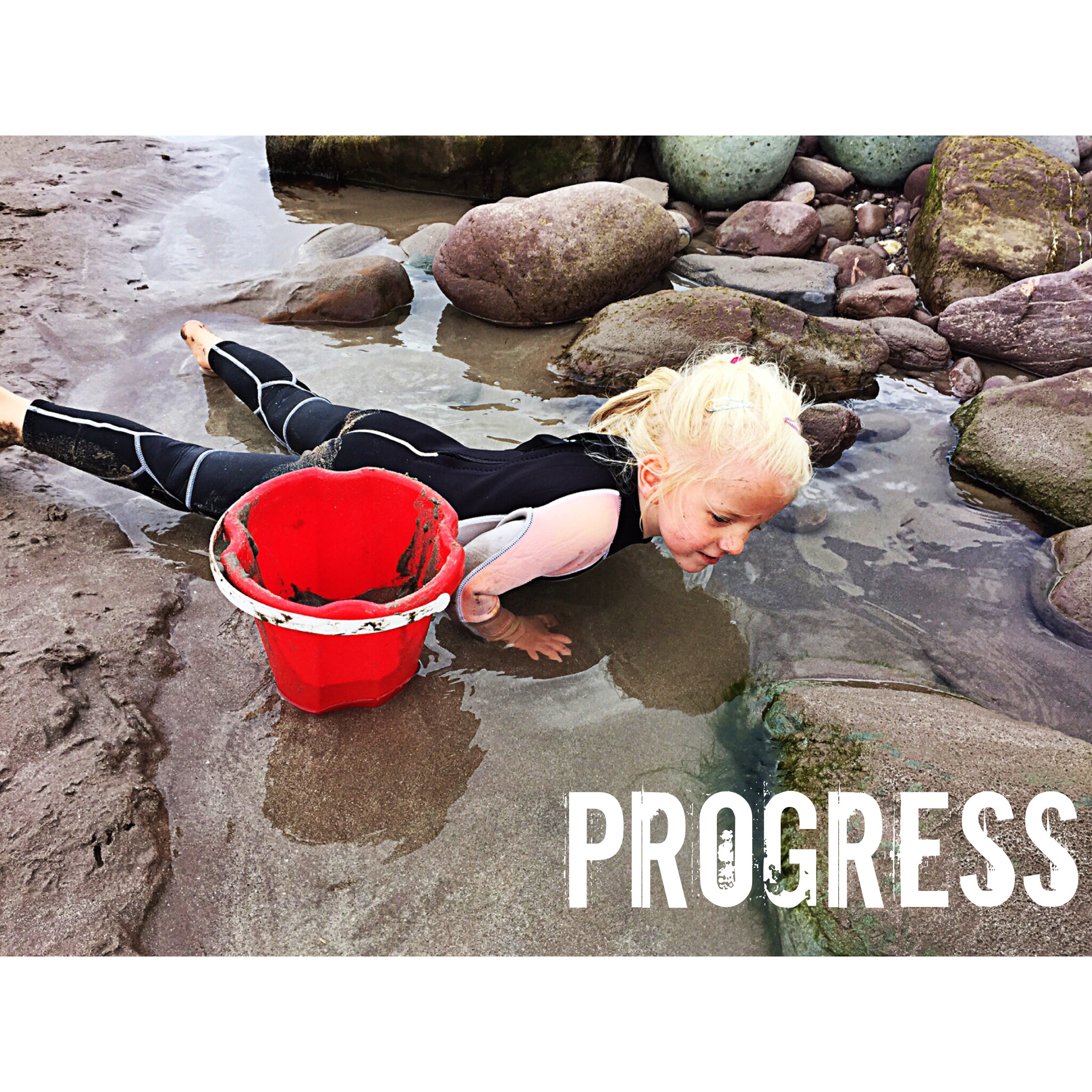 Rebecca Adlington, you’re lucky you retired……this is the next generation (cough). 3 terms of Aqua Tots & we are normally clung to anything that floats like a limpet. This here is progress. I’ll hold off on getting the Olympic Rings tattoo’d on her back for a while.

1st born was a delight…..this is becoming in itself a worrying trend….. False sense of security and all that. But she did try to console me with regards to 2nd borns toiletry habits & announce she had done as I said before and just wee’d quietly into her wetsuit when no one was looking. Again…..to reiterate…..I had never suggested the weeing in the wetsuit part. This, she extrapolated from a prior conversation we had had where I did mention that it would be better to wee whilst waist deep in the ocean quietly than whip off all the gear next to the neighbours picnic blanket and do the job there….and ONLY in the absence of public toilets. 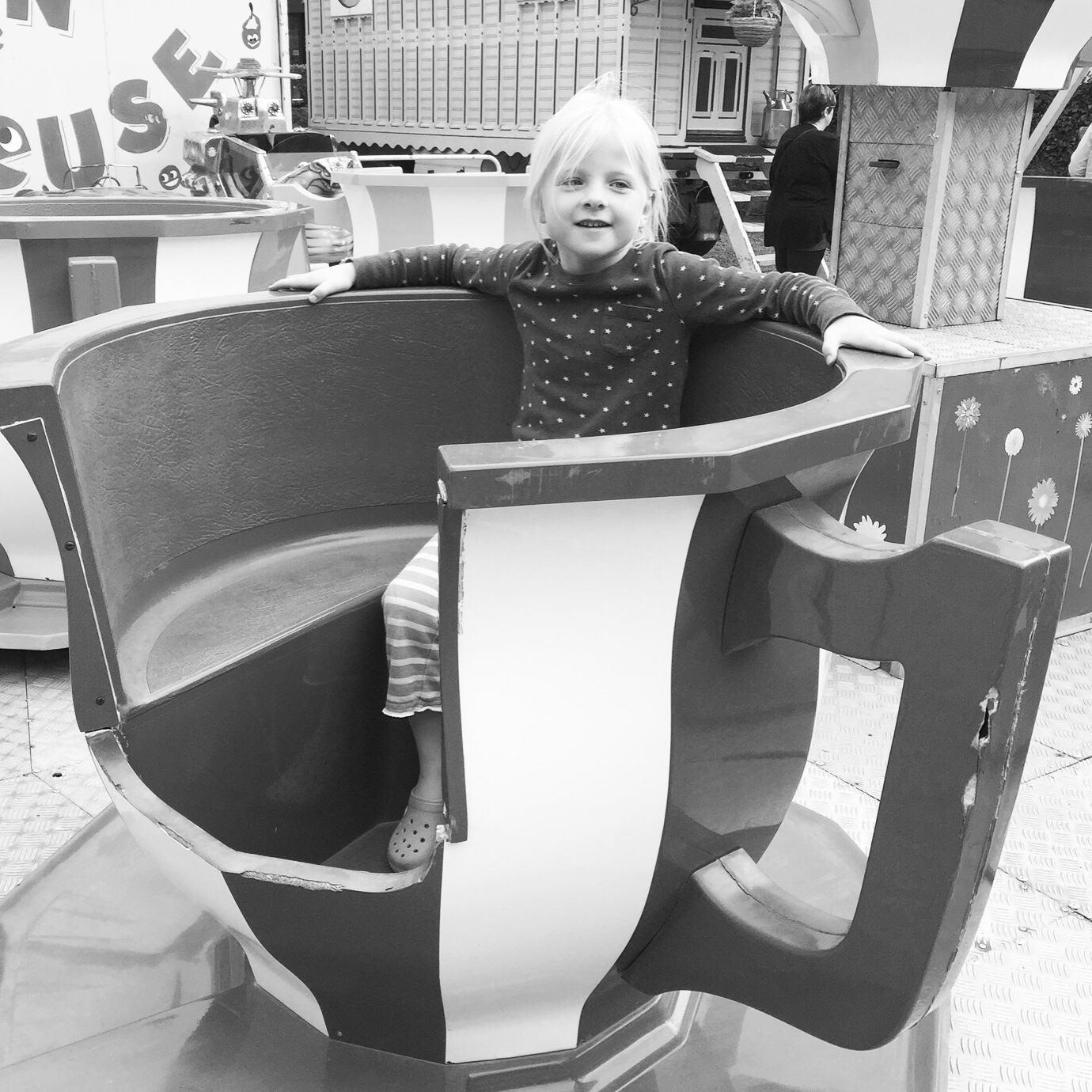 So what did I learn so far?

Whilst less is more there are some necessities – these being:

There are some extra tips I have learned too, such as: 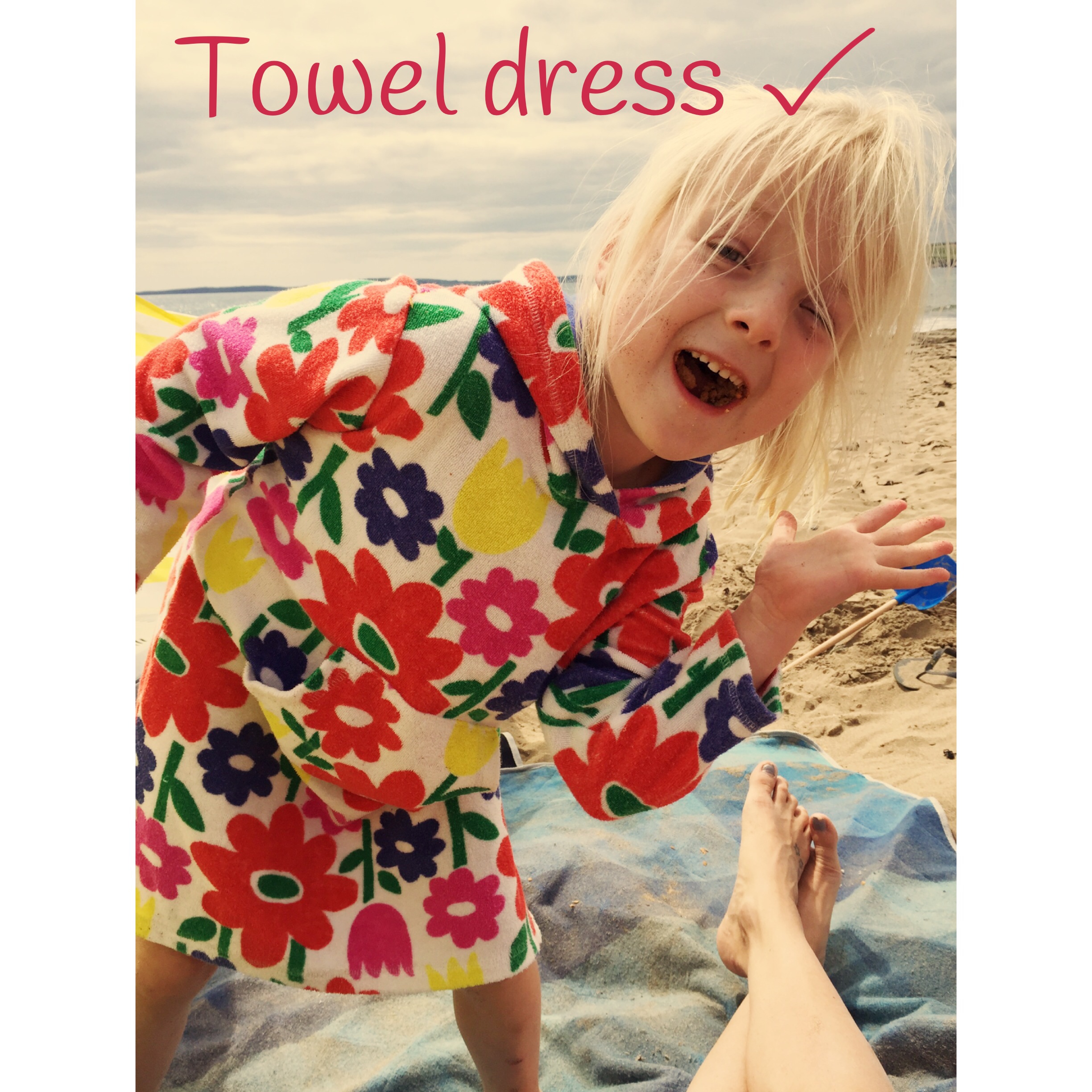 This one is from boden……always purchase here at sale discount time – it is pricey but they last forever!! This is last years one as I buy them huge!

3.   Fresh clothes for after the beach – the original set will be either a) lost or b) wet.

And enjoy it! These are they days we look back on with nothing but complete and utter happiness. It’s never as cold or windy when looked back upon.

Yours, still picking sand from her toes,